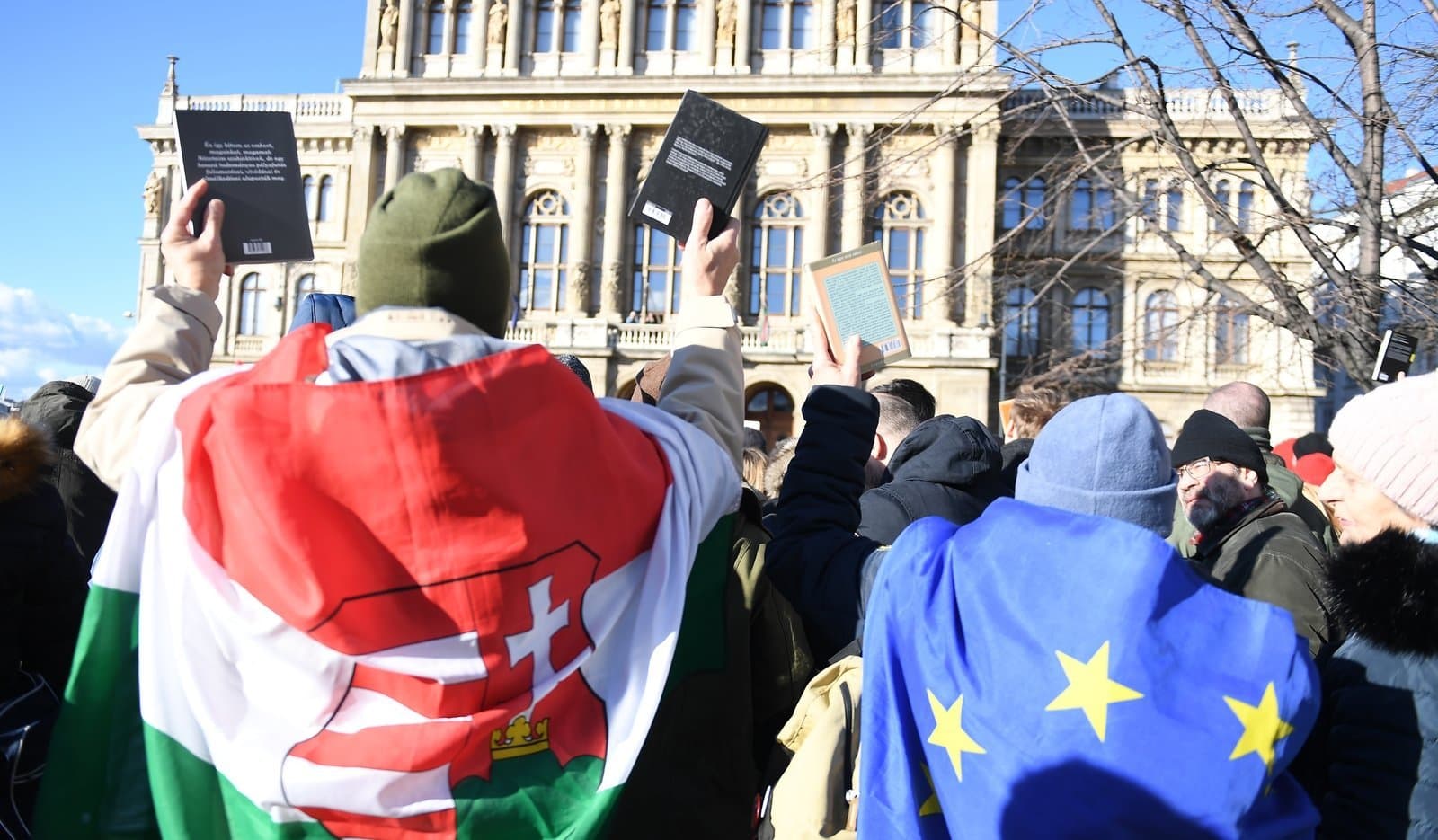 Science for a Plastic Cube. Polypore Academia redefining the Rules of Science

Hungary is currently witnessing the emergence of a state-sponsored scientific pseudo-world in which the criteria of academic quality control no longer apply, but rather political loyalty. This raises serious questions for European research funding and academic cooperation with illiberal states.

When in summer of 2007 the Open Society Archive in Budapest reviewed its collection, they have identified 100 000 volumes published before 1989 and inherited from the Library of Radio Free Europe that nobody read in the past twenty years. The archive announced a public free donation, but still after that 20 000 unread books remained in their collection. Then art came to their rescue and they decided to make plastic book cubes from them. The cubes were donated to institutions in order to serve as tables, chairs or just piece of art reminding the viewers of the fallibility of knowledge produced in the state-controlled academia of Eastern Europe. Will the books produced now in the academia in Hungary and in other countries with illiberal regimes end up soon in plastic cubes as objects of art? This paper argues that it is very likely.

Recently, two disturbing and interrelated events happened in Hungary. First, the Hungarian state the nationalized and centralized the research institutes of the Hungarian Academy of Sciences following the Russian model of institutional reform. Second, it forced Central European University into political exile from one European Union country to another. How will these developments influence research in the field of social sciences and humanities, which are the main targets of illiberal states?

The freedom of academic inquiry has always been a certain illusion, since somebody has to pay the salary of the researchers. There are two different models: one was made by Humboldt, where science is funded by the state, and one belonging to the Anglo-Saxon tradition, where private donors are setting up funds. In both cases, however, the funding is usually managed by a board of scientific experts. Both systems have advantages and disadvantages of their own, but the new development of state capture in Hungary has changed this constellation.

In the past decade, political scientists have been discussing in great length the terminology with which it is possible to understand recent developments in different countries, like Hungary, Poland, Serbia, Brazil, US, and Turkey. With Weronika Grzebalska we call these states illiberal polypore states based on their common modus operandi. Unlike other political scientists who are admiring these states because of their effectiveness we argue that the polypore states do not have any original ideas just taking ideas of others using them for its own purposes, which is self-maintenance.

The polypore state is working with three concepts. The first is security. In its public discourse the state securitises all possible aspects of life and policy areas including portraying gender studies and critical intellectuals as threat. Second is the ideology of familialism that state policies are supporting selected, mostly middle-class families, consciously ignoring the value of gender equality. And third, which is the most relevant for academic knowledge production, the founding and funding of new research and teaching institutions with the same profile as the already existing one, is creating a new phenomenon: the polypore academia. In the past decade in these illiberal polypore countries several new research institutions, museums and universities have been founded with exactly the same profile as the already existing museums and universities had. The difference between these polypore institutions and the already existing ones is that there is no quality assurance and the available funding seems limitless, since funding from other state institutions are pumped to these also state financed institutions.

The lack of quality control in these polypore institutions also led to attacks on systems and institutions of academic quality control in general as a part of the populist turn. In these countries, governments are appointing politically reliable commissars as leaders and members of quality assurance institutions. The state systematically destroys any other mechanism of scientific evaluation. That explains the attacks against the Hungarian Academy of Sciences which awards the title of Doctor of Academy of Sciences (DSc) so far required for professorships. By now, state universities are busy deleting this requirement from their bylaws about promotion criteria. The personnel of these polypore institutions is recruited via personal informal channels and network and not via academic job searches.

What will be the consequences of building up this new polypore academic network in social sciences and humanities? First, the masculinisation of the profession, since the recently appointed are all young and very ambitious men who are well-connected to the elderly men spearheading these developments. They are looking for young men who look very much like themselves but 25 years younger. Second, obvious differences emerge in payment: faculty of these polypore institutions are earning at least twice as much and have access to research and travel grants in their institutions. Third, change in scientific orientation: As the official requirements for professorships are only specifying that academics should have publications in foreign languages and experience in teaching abroad, these polypore academics are publishing in self-published English language journals in Central Asia, Russia, Iran or China, and teach in Hungarian in universities lavishly supported by the Hungarian government in neighbouring countries with Hungarian minorities. These journals are not the usual ‘predatory journals’, which are simple shady business enterprises but journals which are publishing works of a closed circle based on political loyalty without any quality control.

But the most important consequence is that this new academic system is influencing the choice of topics and academic questions raised, which is the return of self-censorship as far as selection of research topics, participation in public discussion or even giving a Facebook post a like In polypore academia loyalty to the in-group secures access to funding – and this funding is available, secure, abundant and easy to obtain, unlike European research grants. The only precondition is that the research proposed should be compatible with aims of the polypore state: securitizing the discourse and supporting the ideology of familialism.

The role of the EU

Will the books produced in Hungary and other countries where the polypore state hijacked the state and academic life end up in a plastic cube as nobody will read them? As I said: Very likely so. But this process also raises serious questions for the European scientific and academic cooperation as a whole. First, about the united European evaluation system. These institutions at first glance look like academic institutions but they are not as they recruit only reliable colleagues who are for different reasons ready to apply self-censorship. Second, this process will add an extra twist to the already present corporatisation of European research. The polypore academia is not only using the resources of social sciences and humanities for ideological reasons, but also STEM for material considerations. The recent nationalisation of the research network of the Hungarian Academy of Sciences means that under the newly established umbrella of corporate and academic collaboration, very much promoted by the government in the framework of excellence and impact, private companies will receive and spend state and EU funding in a non-transparent way supporting politically loyal, reliable researchers – again without any transparent quality control

Third, there is the question of existence or rather non-existence of those institutional mechanisms helping those mostly young and middle-aged academics who refuse to collaborate, resisting to the existential pressure of impoverishment and lack of research and travel grants. The institutional system of helping scholars at political risk is based on the model developed during the Second World War and works on the assumption that the period of being an academic in exile will last only for a few years and the scholars will return to their countries in order to continue their work. This will not be the case with polypore academia, since the institutional and the evaluation systems have been fundamentally transformed. This lost generation of scholars or as they call them after Open Society Institute and Central European University left Hungary, “the left behind academics” will not produce books or journal articles. In the long run they cannot get access to resources as the polypore state uses all of it. If they emigrate, they will have access to academic jobs in the notoriously difficult academic job market only in exceptional circumstances. Therefore, the crucial question is if the representatives of polypore institutions will meet appeasement in the European context as they bring in lavish financial state support in the proposed cooperation, or with rejection and despise. If not the latter is the case, then it is very possible that the polypore is infecting other institutions with its Machiavellian approach to values and moral. Then in the long run we can only hope that the plastic cubes will be made of their lavishly financed books, and not of ours.