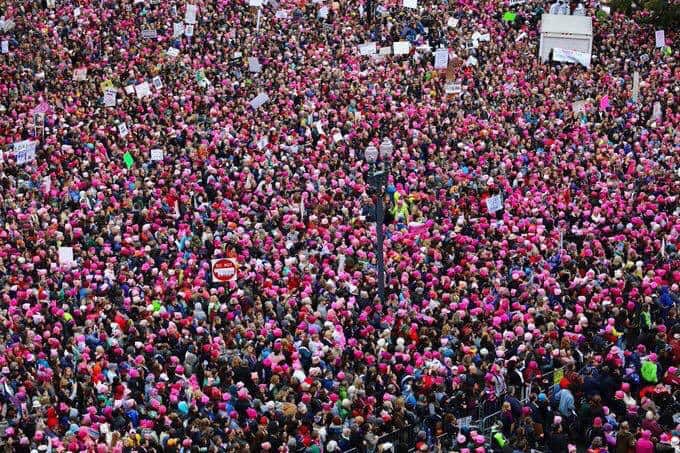 Done. We made history

Millions of people around the world took part in the Women’s March on January 21, 2017. With an estimated three million participants in the United States, the March wrote a chapter in American history. Christine Loriol travelled from Zurich to Washington to participate: “because I just had to be there.” A personal report.

The next day, the “pussy hat” was already an icon. Everyone I met as I left my hotel room that morning gave me a smile, and within minutes we were engaged in conversation. Mabel and Bert from Miami said goodbye with a long, emotional embrace, as if we had been old friends. Amy, Kristen, and Ian from Portland (whom I had met on the street the day before the March ) did the same, as did Melissa from Wisconsin, who stood by me for a while in the crowd of humanity. And then there was the little old lady who simply put her arm around my waist and steadied me (or herself ) after I said that I had come from Zurich, Switzerland. Absolutely everyone I met said: “Thank you for coming. Thank you for being with us.” We had touched each other. I had to think about the line from the National Anthem of Europe (and Beethoven’s “Ode to Joy”): “All people will become brothers” – and sisters.

Born in 1960, I was too young to have personally experienced Martin Luther King’s “I have a dream” speech. My knowledge of the huge Vietnam anti-war protests came only from films I’d seen. And as a newswriter at Radio Zürisee in November 1989, I knew that history was being made in Berlin, but I didn’t think of going there myself to participate. I still reget that today.

I followed the American election with great interest from the moment Donald Trump became an official candidate. The further he progressed, the more intensely I followed the proceedings. My personal low came with the second TV debate against Hillary Clinton. Watching him stalk her, sniffling and scuffling uncomfortably close behind her back, I wanted to protect her. Ha! And the way he stood humping an empty chair obliviously as Hillary spoke about politics: this was someone who simply took whatever he thought was his. It was unbearable. And nobody said anything, not even Hillary Clinton. She should have treated him like a spoiled child or a small dog and said: “Donald, that’s enough. Stop it, sit down!” But who could have actually done that in such a situation?

A transcript of this debate became available later on the internet. This was a tragic document full of interruptions, assertions, mansplaining and manterrupting, contempt and indecency. I felt sick reading it. Much more of the same was to follow, on a nearly daily basis, leading to the infamous  “grab them by the pussy” scandal. Michelle Obama’s speech in response to that news thrilled me, moved me to tears, and made me thankful that somebody finally spoke for me too.

I had been invited to an election-night party at the home of the then-U.S. Ambassador to Switzerland, Suzi LeVine. I brought a female friend with me, as a gesture of female empowerment at what we expected to be a historical moment. But rather than rejoicing together as partners in crime, we became partners in tears.

Four days later, on the afternoon of Sunday, November 13, I bought my plane ticket. The idea of the Women’s March had surfaced on Facebook after the election. It was exactly what I needed to help heal my soul. No one expected it to grow to such dimensions. Throughout the election period and after the election I asked myself why I was so personally affected by Trump’s sexism and mistreatment of women. After all, I am not and have never been an American citizen. Now I know why. And I know I am not the only one.

I was already born when women were granted the right to vote in Switzerland in 1971. In February 2016, shortly before Switzerland held a referendum on the enforced deportation of foreign law-breakers, I watched the movie “Suffragette.” The story pulled me in within the first 40 minutes, as I saw how the female fighters for women’s suffrage were mistreated and humiliated. At some point during the movie it occurred to me that in Switzerland a similar struggle had taken place not that long ago. If it were 45 years earlier, I myself would not be allowed to cast my ballot in the upcoming referendum, while all my male colleagues, friends and relatives exercised their right to vote. I cried tears of anger, because there had been a time when women were officially less valued than men, and because I had personally lived though that time as a young girl. I left the movie theater without watching the end of the film. But the idea of “only a girl” stayed on my mind. My paternal grandmother had expressed her disappointment when I, the first grandchild, was born a girl. My father (thank you Jules!) had always fought for me. Luckily I was brought up with the phrase “You can do it too”: my own personal “Yes we can!”

This personal experience resonated within me during the US election season. Donald Trump versus Hillary Clinton. What did people accuse her of and attack her with? Likeability! Stamina! Her husband, because she’d stayed with him. Her voice. Her ambition. And not least, her competence. Throughout the campaign and after the election, all of these were triggers reminding me of my own so-called “birth defect,” the shortcoming I had not chosen, my gender as female.

That’s why I wanted to be there. This was my subject. It was the theme of my era. I especially did not want to look back in old age and say: “I saw it coming, but I missed the chance to react.” I grew up in the knowledge that our democracy is as self-evident and as indestructible as the Matterhorn. A given. Or, if you prefer, God-given. But I had seen recently that, even in Switzerland, we need to keep an eye on our democracy (with a nod to the historian Jakob Tanner). And that “we” also means “me.”

Among hundreds of thousands

Between election night and Inauguration day, Trump continued to cross the line. As the Women’s March approached, more and more people, and especially more and more women, must have decided: “Enough is enough.” I followed the news on Facebook. The Women’s March had quickly became a professionally-organized event. It got bigger and bigger. Then I discovered the “pussy hat” project. I found it clever and conspiratorial: political knitting! And it began exactly as the March itself had begun, as an idea by two women which quickly spread through social media. A sea of pink pussy hats was their dream, and it caught hold of me too. For the first time in about 30 years, I bought wool and knitting needles. The result was as stupendous as the March itself; pictures of “a sea of pink hats” were beamed around the world.

Hundreds of thousands, perhaps up to a half a million women together with their male comrades surged in the direction of the National Mall. Different generations, genders, ethnic backgrounds, nationalities, religions. They were worried, angry, and all very determined. And yet: they were all peaceful and friendly to each other. And funny! They were angry at the subjects that they were addressing, but they were always considerate and attentive. They excused themselves when they collided with someone in the crush, and lent a hand when someone wanted to step up onto the curb. The police officers moving through the crowd were applauded and told: “Thank you for your service!” The crowd whistled and booed when a speaker mentioned Betsy DeVos, Trump’s Cabinet pick for the Department of Education. It was stirred up and inspired by America Ferrara and Ashley Judd. But the marchers looked out for the people that stood next to them. The list of speakers was very long, and the rally lasted more than four hours. The speeches were emotional, angry, intellectual, political, biting, moving. A 12-year-old Mexican girl spoke more eloquently than Trump; the prominent feminist Gloria Steinem and the brilliant activist Angela Davis delivered high-quality food for thought. Documentary filmmaker Michael Moore presented his “resistance plan” for continuing to the opposition movement after the March was over. The lineup on stage was impressive:

In Los Angeles 750,000 people were estimated to have demonstrated, and not one person was arrested. It was the same in Washington. The only aggression that I personally exerienced was on the internet, in the user comments on the media coverage of the March – written by people who had not been there. From people who found the pussy hats “pathetic” or dismissed the March as an undemocratic temper tantrum. “Get over it,” was their message. “Trump was democratically elected.”  “Get over us” was the impressive response in Washington. “This is what democracy looks like,” chanted the crowd, along with shouts of “Yes we can!”

At the end, I joyfully wore my pink pusssy hat to the Capitol Building for one last photo opportunity, happy that I came here, and thankful as well. The most beautiful thing was probably the sense of belonging. To be shown that I am not alone in the world and not a member of a mere fringe group – and to document this experience in unforgettable photos. To have the feeling of being right, and at the right place. In Washington I experienced and learned a lot, and was given many gifts. And I may have been able to give something back, because I went there. I had personal reasons for doing so, but it went far beyond my own individual motivation. I know that I am a privileged woman: it was important for me to support a movement that supports all women. Who will do this, if not us? When, if not now? Sisterhood. We women have written history. And we made a good start. “And now, let’s get shit done!” as one of my friends likes to say. Not only in Washington.

When I am back home, I will knit pussy hats for Claudia, Marcy, and Franziska. Now I remember how.

About the author: Christine Loriol was a radio journalist in Zurich, Switzerland when the Berlin Wall fell in 1989. She has worked as a freelance journalist for numerous magazines and newspapers, and for the past 20 years has been a copywriter, communications consultant, and coach.