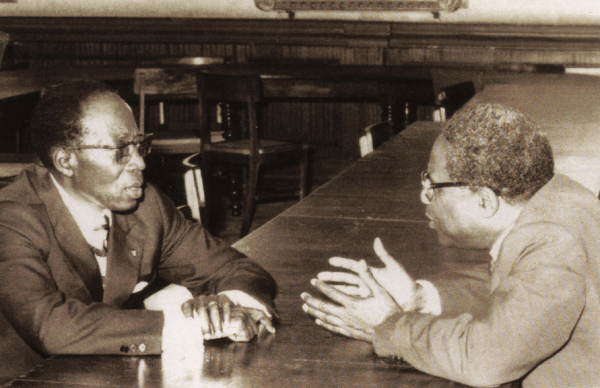 Léopold Sédar Senghor and Aimé Césaire are important founding fathers of Négritude, a literary and political movement opposing the exoticization of Africa. With their philosophical project, they aimed at liberating colonial and colonized thinking – in Africa and in Europe.

Historical research and communication demand two opposing approaches: On the one hand, as you delve more deeply into a subject, things necessarily become more complex – and usually also more complicated. On the other hand, it is necessary to reduce this complexity in order to establish the big picture, as well as to explain and connect facts and circumstances. When considering African history and philosophy, however, it seems that only the reduction of complexity has been acceptable. Writers, politicians, philosophers, and artists have, apparently, been given only two options: They either devote themselves to radical, militant resistance or they are accused of collaboration with “colonialism”. In his book Freedom Time from 2015, Gary Wilder’s valuable contribution is that in his re-reading of the texts of Léopold Sédar Senghor and Aimé Cesaire, he refuses to apply the dichotomy between resistance and assimilation which allows African men and women only these two roles. This refusal renders moot questions such as why “the Africans” did not form an alliance against “colonialism”, or the notion that every literary, artistic or philosophical expression should first be examined on the basis of how they connect and relate to colonialism and post-colonialism.

Aimé Césaire introduced the term Négritude in the Paris-based magazine L’Etudiant Noir in 1935; thus before World War II and decades before the decolonization of Africa. Born in Martinique in 1913, his excellent performance in school won him a scholarship at an elite high school in Paris where he met Léopold Senghor from Senegal, seven years his senior and a student of classical philology.

In the 1920s and 1930s, Paris was a hub for intellectuals from francophone Africa, the Caribbean and the USA. Paulette Nardal, writer and journalist from Martinique, the first black student at the Sorbonne, and, together with her sister, a host of a literary salon, also translated many works into French. In this way, the sisters brought together writers of the Harlem Renaissance and students from the French colonial empire, creating a “transnational black public sphere in imperial Paris.”

Wilder’s book starts with this period, but mainly focuses on the period after World War II “when these student-poets became poet-politicians participating directly in reshaping the contours of the Fourth and Fifth Republic of France.” Senghor had been a soldier in the French army and was taken prisoner by the Germans in 1940. During his two years as a prisoner of war he wrote “Hosties noires” (Black Hosts) and spent a lot of time reading Goethe. After his release, he worked as a teacher and in 1945 was elected deputy to the French National Assembly for the constituency of Sénégal-Mauritanie. Césaire, too, worked as a teacher upon his return to Martinique in 1938 and was elected mayor of Fort-de-France in 1945. As of 1946 he was deputy to the French National Assembly for the French Communist Party until 1993. Césaire and Senghor were convinced that the future of the colonial territories would not lie in national sovereignty, in the building of new nation states, but in surmounting nationalism through a newly-defined territorial framework. Their starting point was not the French nation state, but the French empire. “Senghor called neither for France to decolonize Africa nor for Africa to liberate itself, but for Africans to decolonize France.”

Wilder’s book can be approached in two ways. At one level, it could be read as an intellectual history of Senghor and Césaire’s political and literary work between 1945 and 1960. 1960 was the so-called Year of Africa, the year 18 colonies became independent and Senghor was elected president of the Republic of Senegal after a union between Mali, as well as the utopian dream of a post-national union with France, had both failed. Wilder reconstructs their concepts of federalism, departmentalism, and self-determination on the eve of independence, as well as their ideas of a non-Stalinist socialism and their notion of a fundamental solidarity needed to achieve a post-national and post-racial society. At another level, Wilder understands his re-reading as providing a perspective still valid in our time as we, again, face the challenge of conceptualising democracy and solidarity in a world that needs to be reordered after the end of the East–West conflict, and that is entangled in nation states, empires, and globalization.

Throughout their lives, Senghor and Césaire remained authors of literary texts and this is why Wilder highlights the connections between political thinking and aesthetic practice in the works of his protagonists, who he consider pragmatic utopians and cosmopolitan humanists. Through his elegant and enjoyable style and engaging text Wilder successfully demonstrates that it is possible to decolonize intellectual history by including African philosophy, and also to globalize critical theory by expanding it with the colonial dimension. All this without agreeing with all of Senghor and Césaire’s ideas and without justifying their later politics.

At the constitutive conference of the Parti de la Fédération Africaine in Dakar in 1959, which united delegates from Senegal, Niger, Sudan, Upper Volta, and other African colonies, and should have laid the foundation for an African federal state, Senghor – by this time already deputy to the French National Assembly – explained his programme:

Nevertheless, we shall not be won over to a regime of liberal capitalism and free enterprise. We cannot close our eyes to segregation, although the Federal Government combats it; nor can we accept the elevation of material success to a way of life.
We stand for a middle course, for a democratic socialism, which goes so far as to integrate spiritual values, a socialism which ties in with the old ethical current of the French socialists.

The federation, however, disbanded. Colonial dependence and individual interests in the colonies prevailed. Self-determination and self-governance could barely be thought of outside the nation state and anti-colonial movements argued for national independence for their countries, leading to the founding of new states.

Senghor was confronted with increasing tumult in his own country Senegal. In 1968, a student rebellion took place in the capital, followed by a general strike. While the students protested against the outdated education system, the unrest was rooted more deeply. Senghor might have seriously underestimated class antagonisms; the people protested against the concentration of power in the ruling party, the recession, and the country’s enduring dependence on France after eight years of political independence. Under the influence of the Nigerian Civil War (Biafran War), the removal of Kwame Nkrumah from office in Ghana in 1966, and perhaps of the world-wide student protests and strikes, Senghor reacted by using the police and military to crush dissent.

Honour in Germany – Négritude as history

1968 was also the year in which Senghor became the first African to receive the German Book Trade’s prestigious Peace Prize. While guests listened to the beautiful tribute by François Bondy in the Paulskirche in Frankfurt, the members of the Socialist German Student Union (SDS) protested outside. Their leaflets said: “We will barricade the Paulskirche against this philosophizing puppet of French imperialism who supresses the exploited masses of his people with Goethe in his mind and a machine gun in his hands.” Bondy did not mention the uprising in Senegal in his speech. He honoured instead the “regal president”, who considered himself a socialist, and he spoke in a scholarly manner about the Négritude. According to Bondy, Senghor had always thought of the Négritude – together with métissage (hybridity) – as a global culture.

When we read further through the leaflet of the Socialist German Student Union, we learn of Senghor’s “poetising prattle, which seeks to sell the mysticism of blood and soil for black culture.” Although much of the Union’s criticism was justified, it seems that there was also an underlying element of anger caused by thwarted love.

The Négritude had always been confronted with two rather contradictory accusations: That it put its focus too much on Europe and that it was too essentialist. This critique had been mentioned at the Conference of African Writers of English Expression, which was held at Makarere College in Kampala, Uganda, in 1962. Among the participants were Chinua Achebe, Wole Soyinka, Es’kia Mphahlele, Lewis Nkosi, Ngũgĩ wa Thiong’o, and Rajat Neogy. The main questions of the conference were: What is African literature? Is it literature written by Africans or is it literature that describes the African experience? Does African literature have to be written in an African language?

Primarily the dispute was about whether African literature should be part of a world literature (written in English) or whether it should find its own way. The Négritude, which praised the beauty of the old sensuous Africa in most elegant and polished French, was already considered outdated. Yet Amos Tutuola’s rough pidgin in his equally rough albeit ingenious story about a palm-wine drunkard’s journey into the city of the dead also failed at the conference. Nevertheless, the gathered authors aimed to reduce Western superiority and dominance, and formulate a positive concept of the African persona. These were in fact exactly the issues the Négritude had been engaged with: How can we think about difference without hierarchical devaluation?

Later Wole Soyinka, one of its fiercest critics, reconciled with the Négritude by historicizing it and referring to the different experiences that had been created under British and French colonial rule respectively. But Senghor was looking for something universal. During his acceptance speech in Frankfurt, he said:

[…] that today’s ceremony is strange. Here, you give the Peace Prize to a former prisoner of war of the German army, a prize that, after all, is still a literary prize to an old activist of the Négritude. Strange, indeed, is this ceremony, which expresses fittingly these times of violence and confusion but at the same of a new dawn and clarity, this second half of the 20th century in which we live. Strange therefore, but yet significant. For in the war poems of this poet-prisoner you have found no word of hatred. And this activist for the Négritude has at the same time desired to be an activist for a future universal world culture.

This is a rather confident acceptance speech.

Wilder sees the relevance and eminence of these two poet-politicians in that their ideas did not fit into the binary of resistance or assimilation. They not only claimed a place for their countries next to France, but they also claimed France’s heritage, the French Revolution and the entire history of civilization for Africa, the Antilles, and all colonized peoples. And at the same time, they showed what significant contribution colonized peoples had already made and could continue to make to world civilization.

Wilder considers the two friends, Senghor and Césaire, as thinkers of international historic significance because they were able to think of the world in global terms, at a pivotal historic moment: on the eve of decolonization. And we still face this task today.